Six weeks after Vincent’s death, Theo organized a memorial exhibition of his brother’s work. His many exertions and setbacks meant his own health was now steadily deteriorating too. Shortly after the exhibition, he resigned from Boussod with immediate effect, and promptly suffered a severe nervous breakdown.

Theo was admitted to a clinic in Utrecht, suffering from syphilis-related physical and mental symptoms. He died there at the end of January 1891, barely half a year after his brother’s death.

Following Theo’s death, his widow Jo moved to the Dutch town of Bussum with her son Vincent Willem, taking Vincent and Theo’s art collection with her. She remarried in 1901 to the painter Johan Cohen Gosschalk, and the family moved to Amsterdam two years later.

Jo sought to raise public awareness of Vincent’s paintings in various ways, including exhibition loans to museums all over the world. More and more buyers emerged for Van Gogh’s work.

In 1914, Jo published the first edition of Vincent’s letters to Theo, and that same year she had Theo reinterred in Auvers-sur-Oise, in a grave alongside his brother’s.

Following Jo’s death in 1925 Vincent and Theo’s art collection passed to her son, the engineer Vincent Willem van Gogh, who loaned his uncle’s paintings to the Stedelijk Museum in Amsterdam in 1930.

As Vincent’s fame grew, however, there were calls for the collection to be placed in a dedicated museum.

In 1962, with the consent of the State of the Netherlands, ‘the Engineer’ transferred the Van Gogh collection to the Vincent van Gogh Foundation. In return, the State undertook to build the Van Gogh Museum and subsequently to ensure that the collection is accessible to everyone forever.

Eleven years later the works were moved from the Stedelijk Museum to a specially designed building by Gerrit Rietveld.

Queen Juliana opened the Van Gogh Museum on 2 June 1973, since when it has drawn visitors from every corner of the world. Two million people now visit the museum every year.

'I can do nothing about it if my paintings don’t sell. The day will come, though, when people will see that they’re worth more than the cost of the paint and my subsistence, very meagre in fact, that we put into them.'

Opening of the Van Gogh Museum with Her Majesty Queen Juliana, 1973 (Dutch spoken) 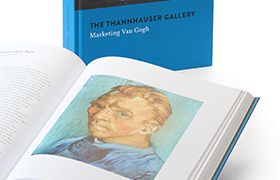 How did Vincent's work get sold after his death? Discover more about the crucial role of the Thannhauser Gallery. Buy the book