How a German gallery traded dozens of Van Gogh’s works in the opening decades of the twentieth century.

The Thannhauser Gallery: Marketing Van Gogh tells the story of one of the pre-eminent art dealerships in Germany in the decades before and after the Second World War. The book focuses on the significant role played by the Thannhauser Gallery in the trade of works by Van Gogh in the first half of the twentieth century, and outlines the marketing strategies of an art dealership that managed to hold its ground in a rapidly globalizing world.

In this publication, the Van Gogh Museum presents the results of years of research into the provenance of the paintings and drawings by Van Gogh that were sold through the Thannhauser Gallery, and into the sophisticated approach adopted by the dealership. Many of these works are now part of the collections of renowned museums such as the Metropolitan Museum of Art in New York, the Musée d'Orsay in Paris and the State Hermitage Museum in Saint Petersburg. A significant part of Justin Thannhauser’s collection can today be found at the Solomon R. Guggenheim Museum in New York, including three paintings and four drawings by Van Gogh.

Marije Vellekoop (Head of Collections, Research and Presentation at the Van Gogh Museum): ‘The Van Gogh Museum is the definitive knowledge centre on Vincent van Gogh. Instead of limiting ourselves to our own collection, we research and document his entire oeuvre. Being afforded the opportunity to examine the Thannhauser Gallery’s archives resulted in many new insights, which we are now pleased to share with the world in this voluminous, richly illustrated publication’.

Dozens of works by Van Gogh

The Thannhauser Gallery was one of the most significant art dealerships in Germany in the opening decades of the twentieth century. From 1905 onwards, Heinrich Thannhauser started to build up an impressive network of art dealers and collectors for the sale of modern art. His son Justin Thannhauser and nephew Siegfried Rosengart later followed in his footsteps. In its early years, the gallery traded in the art of the Impressionists, Post-Impressionists, Fauvists and contemporary Dutch Expressionists, including work by Degas, Monet, Gauguin and Van Gogh.

The Thannhausers ensured that the works were given plenty of space in their modern gallery, instead of cramming the walls full of art. With his innovative style of presentation, Thannhauser gave potential buyers the opportunity to devote their full attention to a single piece. The gallery also published catalogues featuring all of the available works, complemented with essays by art critics providing an art-historical context.

This revolutionary approach resulted in additional publicity. In the case of Van Gogh, it allowed the public to truly trace the artist’s development and see him as part of an international movement in contemporary art, rather than an isolated, mentally troubled artist. First and foremost, Thannhauser naturally wanted to sell Van Gogh’s work, but in doing so, he indirectly steadily increased Van Gogh’s reputation as an esteemed and recognized artist.

Although it has now emerged that the Thannhausers sometimes sold paintings wrongly attributed to Van Gogh, most of what passed through the gallery was among the best of Van Gogh’s oeuvre. Many works ultimately found their way into renowned museum collections including the Solomon R. Guggenheim Museum and the Metropolitan Museum of Art in New York, the Musée d'Orsay in Paris and the State Hermitage Museum in Saint Petersburg. In total, the Thannhauser Gallery dealt with more than 100 paintings and drawings by – or formerly attributed to – Vincent van Gogh.

In addition to exploring the approach adopted by the dealership, in The Thannhauser Gallery: Marketing Van Gogh, the Van Gogh Museum also presents the results of extensive research into the history of the works by Van Gogh that were purchased and sold by the Thannhauser Gallery. The most important source of information was the Thannhauser archive. This was placed in the ZADIK – Central Archive for German and International Art Market Research in Cologne in 2005, and only then became available for research.

Alongside the inventory books, correspondence and catalogues, it was primarily the enormously detailed client record cards that resulted in numerous new insights. A card was kept for each customer, recording all information about purchases, sales and negotiations. This card system offers a fascinating insight into the daily comings and goings at the gallery; how clients’ tastes were determined, visitors were influenced and prices rocketed as the years passed.

New perspective on the trade in Van Gogh

Years of research culminated in this scientific publication, which includes four in-depth essays and an extensive catalogue section featuring all 107 paintings and drawings by Van Gogh that passed through the Thannhauser Gallery at any time, including the works that were originally attributed to Van Gogh but which later proved to be by another artist. The articles and catalogue texts chart the gallery’s history, methods and clients, illuminating the trade in Van Gogh’s work through the years; first in Germany, in Paris from 1937 and ultimately in New York after 1941.

In addition to offering a new perspective on how Van Gogh’s art was traded in the first half of the twentieth century, the book also outlines the modern marketing strategies of an art dealership that operated in a changing and rapidly globalizing world. The lead authors of The Thannhauser Gallery: Marketing Van Gogh are Stefan Koldehoff (journalist, author and arts editor of ‘Deutschlandfunk’ in Cologne) and Prof. Dr Chris Stolwijk (former Head of Research at the Van Gogh Museum; currently General Director at the RKD – Netherlands Institute for Art History and Professor of Dutch Art History in an International Context, 1800–1940 at Utrecht University).

The English language edition is published in collaboration with Mercatorfonds, Brussels. Yale University Press, New Haven and London, is responsible for distribution outside Belgium, the Netherlands and Luxembourg. A German co-edition is being published by Belser Verlag. The book is on sale at specialist bookshops, via the publishers and the museum shop, and can also be ordered online via the Van Gogh Museum Shop for €44.95 (German edition priced at €49.95). Hardback, 180 ills, 328 pages. 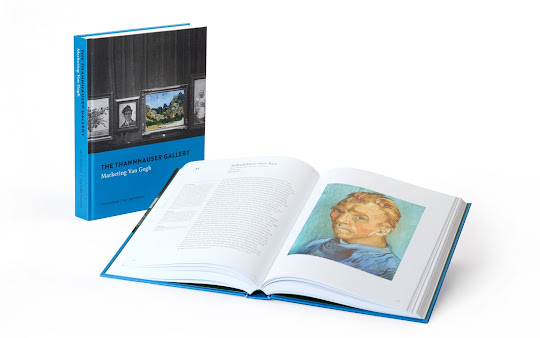 The Thannhauser publication is available in our webshop now