The Van Gogh Museum has acquired 91 prints by Camille Pissarro (1830-1903). The extensive collection shows the extent of Pissarro’s experimental approach.

In 2019, the Van Gogh Museum enriched its collection with 91 prints by Camille Pissarro (1830-1903). This acquisition was supported by generous contributions from the BankGiro Loterij and the Vincent van Gogh Foundation. The museum’s modest collection of Impressionist prints has therefore grown into a significant sub-collection. Until 26 May, 42 of the finest acquired Pissarro prints will be on display in the print cabinet in the Exhibition Wing of the museum.

Pissarro was one of the leading and most productive Impressionist printmakers, creating some 200 prints during his career. He did not produce his prints to sell them. The artist primarily wanted to experiment with different techniques and materials in the privacy of his studio. The simple compositions appear to have been spontaneously created. Together, they offer an insight into Pissarro’s immediate surroundings in Pontoise, a rural commune north of Paris.

In the mid-19th century, there was something of a revolution in printing. Prints were no longer only a means of reproducing paintings, but increasingly became artworks in their own right. The Impressionist peintres-graveurs, including Pissarro, were quick to discover the artistic potential of printing. In the various states of the prints, versions printed from the same plate, they explored the changeability of light effects and weather conditions. Each print is a unique impression, making it highly rare and distinctive.

The acquired collection contains various states of most of the compositions, making the extent of Pissarro’s inventiveness and experimentalism evident. He used a range of materials, such as sandpaper and a wire brush, to create the effects with which he captured his changing environment. He sometimes scratched additional lines to create the effect of rain, or scraped away sections to produce a sunset.

The Old Cottage is a fascinating example. Four different states of this print are on display in the print cabinet. Instead of working from a line drawing, as is customary in etching, Pissarro’s starting point was the speckled aquatint, to which he added more details. This means that the contours of the house are vague in the first state. In the subsequent states, the house gradually emerges out of the mist, and in the final state, a sunset even appears.

Side by side with Degas

The sixth state of The Old Cottage is coloured in by none other than Edgar Degas, à la poupée: directly onto the plate. Degas and Pissarro collaborated closely in 1879-1880. Several prints even bear a sales stamp from Degas’ studio auction, indicating that they were still in Degas’ possession when he died. The prints that Pissarro created in this period are amongst the highlights of the collection.

The unique collection offers a comprehensive overview of Pissarro’s Impressionist printing and brings us closer to the idiosyncratic artist and his innovative experimentation. 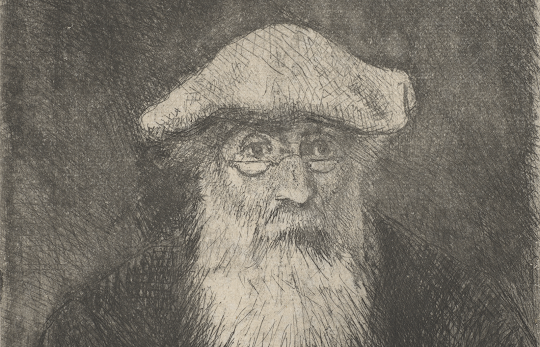 All 91 acquisitions are on view in the online collection